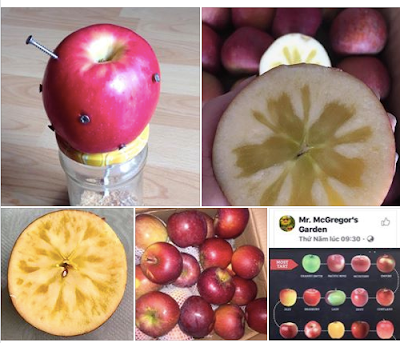 Leave from 8-12 hours in a ventilated place. Then cut apples to eat, remember, do not cut off the apples that are black, because the nails leave ".

Tips for using the screws to eat apples to replenish the iron on social networks.

Facebook T. T adds, due to the sour substance and organic acid types in apple interact on the iron stud and pulling iron molecules into the apple, so the apple after being crucified is rich in iron, and the body absorbs quite rapidly the amount of iron Dissolve.

If there is no apples, then close the Purple plum also. Do not close into the lemon, because of a excessive amount of acid, and lemons hardly dissolve iron than apples.

This iron supplement many people think is "crazy" and inefficient.

. DR. Nguyen Thi Lam, deputy director of National Nutrition Institute for Hay, using the nail plugs in apples then eaten is also said to be one of the additional ways of iron for body. However, the effect of iron absorption in the absence of high.

The story of inorganic iron (iron nails) in food was not a new story, many years ago in Cambodia took the iron fish into cooking soup. The purpose of iron fish may be to stop iron and prevent anemia.

"I personally find that the addition of inorganic iron by plugging iron into apples is not necessary because the absorption is very low under 5%.

To strengthen iron now there are many foods and preparations of high iron absorption. For example, beef can absorb 30% of the iron, and dark green vegetables rate iron absorption from 5-7%. Organic iron preparations The ability to absorb letters from 30-40% in the body ", PGS. DR Lam said.

According to TS. Words, Secretary General of the Vietnam Nutrition Society, plugged 12 nails to apples to replenish iron is not the idea of "madness". However, the reliability of this method is not high.

This specialist explains more, that iron absorbed into the body used in red cell is not inorganic iron or iron.

"This way I'm understanding is trying to put iron in food. But the inorganic iron though plugged, soaked in food is also still inorganic iron.

Inorganic iron when entering the body absorption rate is very low, remaining iron organic in food, the likelihood of absorption is higher.

In addition, if eating apples with iron nails will not know the content of iron into the body is how much percentage of absorption is, "TS. Words spoken.

According to nutritionists a lot of high-absorption iron foods should not be taken by the method of "blind prison" does not know how effective will come. 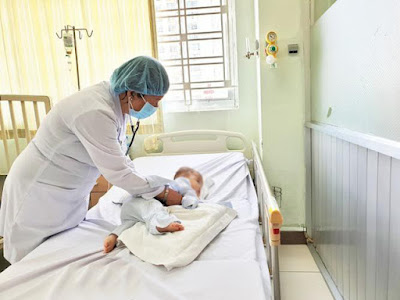 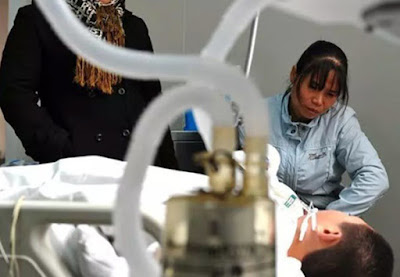 Renal failure is a disease that causes partial or complete loss of kidney function. When it comes to this disease, many people will think of elderly patients. In fact, just to maintain a good living habit, kidney disease will appear at any time.

Ms. Bao, 36 years old in China never thought about it before, so the disease fell to her family. It is known that Ms. Ly divorced her husband and now lives with her only son, 10 years old. In order for your son to have a better life, Ms. Ly worked hard. But this indirectly caused the tragedy for the little boy.

In recent months, the sub-coated has the phenomenon of anorexia, urinating, and spirit of prolapse. But lately, Ms. The new know thanks to the phone from school. The teacher said that the subfainting was in the class and was brought to the hospital.

When she came to the hospital, she was informed by the Doctor of a gynecologist with acute renal failure, which need…
Read more